it's a turn key gold mining set-up.
Posted by Dan Piraino No comments:

Sunken Treasure's From The Atocha Set For Auction

The 1622 wreck of the Nuestra Señora de Atocha, a Spanish ship laden with New World gold, became the fixation of a chicken farmer turned deep-sea diver named Mel Fisher.
He searched doggedly for the treasure for 16 years
(and tragically lost his son and daughter-in-law when a salvage boat capsized during the search).

Mel Fisher's Treasures Treasure salvaged by the Fisher team from the Atocha and the Santa Margarita, Spanish ships lost in 1622. In 1985, the Fisher team came upon a large portion of the wreckage.

The treasure they've extracted since then is worth some $500 million, the Fishers say. A fraction of that is about to go under the hammer at a Philadelphia auction house. Three large silver bars, two small gold "finger" bars and one gold disc that went down with the Atocha will be featured in Freeman's Jan. 25 Fine English & Continental Furniture & Decorative Arts sale. (Items from the sale are on view at the auction house's Philadelphia headquarters starting Friday).


In the early 1600s, the Spanish monarchy dispatched armadas regularly to stock up on gold, silver and gems from the Americas to help fund its army. The Atocha was one of several ships that fell prey to Caribbean hurricanes en route home from Cuba and sank off what would become Key West, Fla.

On the Atocha, 260 people drowned and about 70 tons of treasure were lost.
(The other ship, the Santa Margarita, ran aground.) 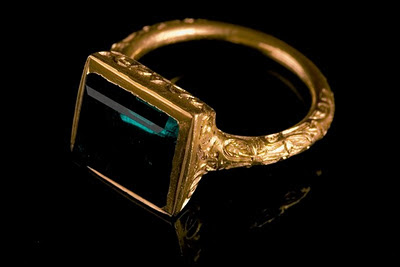 An emerald ring found by the Fisher crew.

Mel Fisher's heirs have stayed in the family business and continue to mine the Atocha wreck and several others.

Two Florida museums, the Mel Fisher Center and Museum in Sebastian and the Mel Fisher Maritime Museum in Key West, always have Atocha objects on display. In June, the Fisher crew came ashore with an emerald ring that Mel Fisher's grandson Sean says was recently appraised at $1.2 million.

The most valuable portion of the ship—the stern castle, where the onboard nobility stashed their personal artifacts and spoils—still hasn't been discovered. Betting on new technology, the younger Mr. Fisher predicts that part of the ship will be his team's by summer or before, with dives happening almost every day. "As long as the weather's good," he says, "we're on the site." 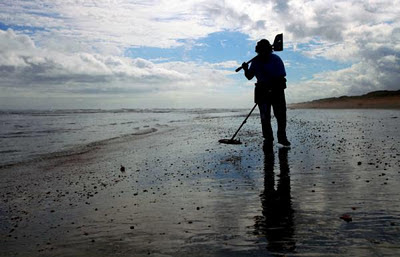 By SHELDON GARDNERstaugustine.com Copyright 2012 St. Augustine Record. All rights reserved. This material may not be published, broadcast, rewritten or redistributed.

Metal detectorist finds rare treasures under sands in St. Johns County
sheldon.gardner@staugustine.com
Bob Spratley has a lot of secrets.
He knows where to find 20 shipwrecks around St. Augustine, he can find gold and silver buried beneath the sands of local beaches, and he discovered one of the sites of the nation’s most notorious slaughters.
“He found the Matanzas site, the massacre site,” said John Powell, living history interpreter at the Fountain of Youth. “Bob is beyond a metal detectorist. Bob is touched by God.”
Spratley has been hunting with a metal detector for 41 years. Research, skill and maybe a little luck have led him to shipwrecks, Spanish outposts and historical sites that archaeologists wish they knew about.
His collection contains thousands of relics, and the walls of his home read like a museum: 16th century Spanish and French gold coins and weapons, buttons and buckles, crosses and amulets, cannons and guns.
“It gets in your blood, and once it gets in your blood, you’re a victim,” he said, a Spanish silver piece of eight worth $35,000 hanging from his neck. “If you want a collection like this, you dig everything.”
Spratley protects his collection with coded log books of his finds and shares information only with trusted sources. He doesn’t tell archaeologists where he finds things because, as he says, he doesn’t want the sites to be roped off, he doesn’t want the history he uncovers to be put on a shelf. Archaeologists and treasure hunters don’t work well together, he says, because archaeologists see treasure hunters as a danger to historical preservation.
For Spratley, finding treasure is not the only goal. Hunting down the secrets of history is a passion that runs parallel to metal detecting.
His hobby has led him all over the country to go detecting and into his home office for countless hours of research and study.
About 20 years ago, Spratley began researching the Matanzas site where, in 1565, Pedro Menéndez de Aviles slaughtered hundreds of Frenchmen under Jean Ribault somewhere near the site of where Fort Matanzas stands today.
The hundreds of French who died on those beaches left behind coins, buckles, and weapons. They left their stories in the sand.
Hundreds of years later, metal detector in hand, Spratley began to uncover what he believes is the site of the slaughter. It took about 15 years for him to find the site, he said.
History books say that Ribault’s men were slaughtered near the Matanzas inlet, that’s why the name means place of slaughters. Spratley says he thinks he has found the exact location of the massacre.
“That’s why I say it took place here. You find weapons,” he said as he held a Spanish crossbow bolt from the 1500s on a local beach, what he says is the massacre site, just after dawn.
Spratley made clear that the location of this dig, like the other sites, is to be kept a secret.
A nor’easter had blown through and sifted treasures closer to the surface a couple of weeks before the hunt. After a quick briefing from Spratley, a select group of his friends and acquaintances scoured the coastline, speckling a stretch of sand with scoop holes. Within 30 minutes, treasure surfaced.

Touching history
Butch Holcombe is the editor and publisher of American Digger magazine, a magazine for relic hunters and metal detecting enthusiasts. He came from Georgia for the hunt, and he got lucky.
“Holding hands with history,” Holcombe exclaimed as he held a freshly unearthed, possibly 16th century Spanish buckle in his hands. Holcombe is used to hunting in Georgia for Civil War relics, he said. Finding anything from the 19th century is exciting. But this, this is from the 1500s.
“I love holding something that old,” he said, staring at the buckle in his palm. “Touch of Spain, wow.”
Quickly, the hunt continued. Headphones went back on, legs lurched forward and detectors swayed from side to side. There were more discoveries, and, as with most hunts, there were some duds mixed in with the sand.
“Bob, what’s this?” Jerry Solomon from Dallas, Ga., asked as he held up a sand-coated object.
“It’s a penny,” Spratley said after a glance.

‘Amazing’ finds
Spratley acts as historical interpreter for most of the finds on the beach, but he sometimes seeks out help from other sources, archaeologists, professors, and antiquity experts. One source is John Powell, living history interpreter at the Fountain of Youth. He is a archaeological conservationist and military weapons expert of the Spanish period.
Powell spent some time flipping through pictures of Spratley’s finds in a parking lot near St. George Street. He identified the relics in the pictures almost immediately.
“I’ve avoided digging for myself,” Powell said, dressed in colonial Spanish garb as he leaned on the trunk of a car one afternoon.
Powell has worked in antiquity since he was 8 years old, he said. He metal detects, but uses his expertise to help Carl Halbirt on some digs. He avoids treasure hunting to preserve his relationship with the archaeological community, but also helps Spratley.
“I know Bob very well. I help him to identify what he finds,” he said. “He comes up with things that are absolutely amazing.”
In addition to the Matanzas site, Spratley has found Spanish campsites, he said.
Powell’s interest in the finds are reproduction — having molds made from historical finds like jewelry that can be recreated and worn by himself and other historical re-enactors.
Later on during the hunt at the Matanzas site, Spratley shouted. He had made the find of the day.
He nudged back a layer of sand to reveal a bronze Caravaca cross, probably 16th or 17th century.
Typically carried by monks or priests for religious purposes, the cross was named after the southeastern Spanish town of Caravaca de la Cruz and has been associated with miracles, he said. People other than monks or priests used the Caravaca cross for good luck and protection. Finds like the cross are what add an element of controversy to treasure hunting. This isn’t someone’s lost Rolex. This is a historical relic.

Not stealing history
“People frown upon us because they think we’re stealing history,” Spratley said. “We’re not. We’re displaying, showing people.”
Spratley said he loves to share the treasures he unearths, but on his own terms. In particular, he likes to share history with children. He has been to local schools, including Middleburg High School, where he displayed a conquistador helmet, signal cannon, olive jars and other relics.
The goal is to let kids hold history and get inspired by it, he said. “I let the kids hold it, even though it’s priceless,” he said about the relics. “That’s the future of history is the kids that are in school today...If just one goes on to study history, it tickles me to death.”
Spratley doesn’t sell anything of historical value, he said. He sells lost rings, watches and other jewelry to support his hobby, which he took up full time after retiring as a real estate broker in 2004.
Spratley has collected a trove of secrets after 41 years of metal detecting, and a storeroom full of treasure that he worries about how to preserve now and after he’s gone. After coming back from Vietnam, detecting was a way to get back into society and deal with anxiety. Treasure hunting has been a hobby, a passion and a pain reliever throughout the past four decades.
After Spratley found the Caravaca cross on the beach that day, he put his detector down for awhile. He wanted to give the others a chance to dig up something big. It’s not all about the treasure, he said. For Spratley, the relic hunter, the most valuable thing he’s found is intangible.
“Freedom,” he said, “to be able to do what I want and share it with people.” 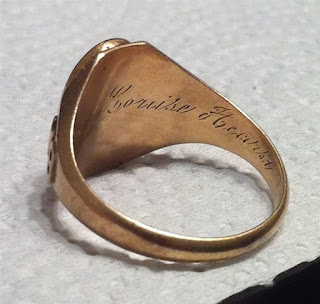