There's Meteorites In Them Their Hills 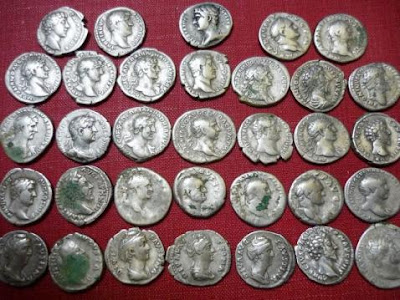 A hoard of 33 rare Roman coins has been found in a field near Hebden.

Colne man Mick Wilson, who had been metal detecting with his friend Colin Binns, of Skipton, made the startling discovery on May 29, 2011.

The 33 silver Roman dinari, dating from 30AD to 170AD, were found nine inches below the ground’s surface.

Now Mr Wilson has been designated as the finder of the treasure by coroner Robert Turnbull during an inquest in Skipton.

“I do a lot of detecting in the Yorkshire Dales,” said Mr Wilson, who has been metal detecting since 1981.

“Colin and I have been doing this for a long time, and although we always find something, this was my best find ever.” Mr Wilson, who works as a polytunnel manufacturer, said the hoard of coins, which is currently being valued by the British Museum, could be worth between £3,000 and £5,000.

Mr Binns said: “It’s likely that it was buried there for safekeeping by a legionnaire. Many of these men would have settled here after they finished in the Roman army.”

In the past, Mr Wilson has found axeheads and spearheads dating from the Bronze Age, Roman brooches and a solid silver Roman eagle, which was valued at £1,675.

Mr Wilson said he recorded all of his finds with the Liverpool Museum and Craven Museum had shown an interest in displaying the 33 Roman coins.

just love the history and finding things that are over 1,000 years old,” said Mr Wilson. “I also love the scenery of the Dales and I know a lot of the farmers.” He said if he made a valuable discovery, half of the proceeds from the sale of the “treasure” went to the farmer and he and Mr Binns split the other half.

“A lot of people call us treasure hunters, but many people never find a treasure. However, I do know people who have found items valued from £20,000 to £1 million. But you have more chances of winning the lottery than making such a find.”
Posted by Dan Piraino No comments: 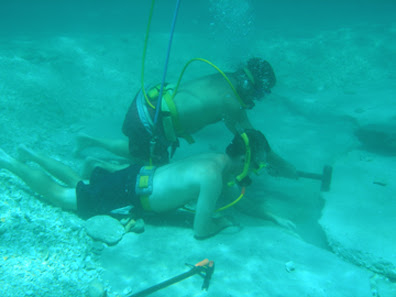 With the 100th anniversary of the Titanic's demise capturing the world's attention this week, present-day explorers are focused on making their own heart-stopping discoveries.

One group on the hunt is Florida-based Jupiter Wreck Inc., led by Dominic Addario.
For the past 25 years, Addario has been at the helm of expeditions to recover what he believes is a 1600s Spanish shipwreck off the eastern coast of the Sunshine State.
His interest was piqued in 1987, when two surfers who’d fallen off their boards mentioned to him that they’d seen a cannon half-buried underwater.

Addario was running daily boating trips, not treasure hunting, in those days. "We had no idea that was a whole shipwreck there," Addario told BusinessNewsDaily. "Within the first week, we discovered four more cannons and lots and lots of coins."

In the following weeks and months, the Jupiter Wreck team unearthed cannons, cannon balls, muskets and thousands of coins. That set the stage for a quarter-century quest to recover the rest of the debris.

"Once you start researching everything, it makes it even more exciting," said Addario, who says the best part is the emotional rush of putting his hands on something that had been lost for 400 years. "It is almost better than sex."

At the heart of the operation is the Motor Research Vessel named Enterprise, a 65-foot foil-assisted aluminum catamaran. The boat is equipped with unique undersea mobile excavation and sand bypassing and transferring technology.

"There is still so much more to explore," Addario said. "Every time we dive, we find something new."

In addition to their finds early on, Jupiter Wreck has uncovered thousands of silver and gold coins and a 78-pound silver bar, all of which Addario believes come from Spain's San Miguel Archangel, a boat thought to have shipwrecked off the coast of Florida in 1659.

Addario believes the actual wreckage is buried 45 feet under the ocean's floor.

He has faced some challenges, including a legal battle with the state of Florida over the wreckage and the site. While courts have named Jupiter Wreck the shipwreck's custodian, they have also granted the state permission to restrict Addario and his team from using any machinery to dig up sand to find the rest of it.

"This has been going on for 24 years," Addario said of the frustrating legal battle.

While Addario said the items he has recovered are worth millions of dollars, he adds that finding the ship, or possible ships, below the ocean's surface could reveal a treasure trove of ancient remnants.

"The payoff could be enormous," he said.
Already, though, Addario said the quarter-century voyage has been well worth it.

"I am real proud of what I have accomplished," Addario said. "It has just been one adventure after another."
Posted by Dan Piraino 1 comment:

OAKLAND, Calif. (AP) — An 11-year-old trawling the waters of Lake Merritt for garbage as part of a class cleanup project recovered two bags of treasure instead.
The bags filled with antique jewelry, gold and silver chains, pocket and wrist watches, and other valuables weighed about 15 pounds each and were submerged in a few feet of water, said Richard Bailey, executive director of the Lake Merritt Institute, which runs cleanup programs at the 140-acre lake.
Bailey waded out to retrieve the sacks Thursday after the student was unable to lift them out of the water with a net. One of the bags had "Wells Fargo" stamped on it.
"We've had some unusual things, but this is really pretty unusual," Bailey told the Oakland Tribune.
Bailey said volunteers usually come across plastic bags and other litter although he told the San Francisco Chronicle that adult volunteers previously found a couple of kilograms of white powder, a sawed-off shotgun and an Uzi rifle.
Students have previously found clothes, cellphones, tennis balls and wallets, according to school officials.
The jewelry and other valuables found Thursday were turned over to police, who have not had a chance to check them against a list of stolen items, the Tribune reported.
A call to Oakland police by The Associated Press on Friday was not immediately returned.
The student was among a class of sixth-graders from St. Paul's Episcopal School that goes out to the lake every week as part of a cleaning and community service project.
Posted by Dan Piraino No comments: