I tend to get off topic every now and again, but this is for a worthy cause. 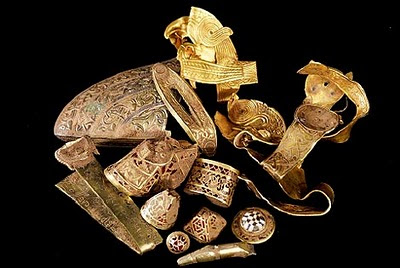 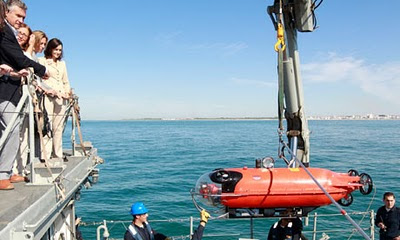 Spanish ministers watch as a Pluto submarine is lowered into the sea off Cadiz. The navy is trying to protect Spain's historical heritage from private salvagers.

Spain has sent an armada into waters around its coasts to seek out hundreds of shipwrecks in an attempt to head off a US marine exploration firm accused of plundering Spanish property from the seabed.

Over the past month, more than 100 suspected shipwrecks have been located by the Spanish navy in the Gulf of Cádiz, considered one of the world's richest hunting grounds for underwater treasure.

Dozens of Spanish galleons returning from the colonies in South America in the 16th, 17th and 18th centuries are believed to have sunk in waters around Cádiz.

Royal Navy warships and other British vessels may also be among the wrecks the Spanish navy says it has located.

Between 500 and 800 ships are thought to lie at the bottom of the Gulf of Cádiz.

Three Spanish navy vessels, including two minesweepers, and 100 navy personnel are devoting two months to the project, which will end in mid-November.

Spain's navy said it had recovered evidence from potential wreck sites which was being analysed by archeologists. It said the sites could contain anything from crashed aircraft to ancient settlements.

The Naval Museum in Madrid and the National Subaquatic Archaeology Museum in Cartagena will receive much of the material recovered from the seabed.

Spain is in the middle of a legal battle with marine exploration firm Odyssey over treasure the US company has recovered from the seabed. It wants to avoid a repeat of the saga that began in 2007 when Odyssey salvaged an estimated $500m (£314m) in silver coins and artefacts from what Spain claims was a Spanish galleon. The treasure was landed at Gibraltar and then flown out to the United States.

A US court ruled last year that the find belongs to Spain, but Odyssey appealed and still has the treasure. It was due to submit its appeal at a US court today.

Odyssey has also mapped sections of the English Channel seabed. It signed an agreement with the British government in 2002 to explore the wreck of the HMS Sussex, a ship which went down somewhere off Cádiz in 1694.

In 2008 it filed claims on two wreck sites off the coast of County Kerry in Ireland. Last year it reached agreement with Britain to salvage artefacts from HMS Victory, which went down in the Channel in 1744.
Posted by Dan Piraino No comments:


View Larger Map
Many tales of buried treasure in and around Upstate New York seem to center on the French & Indian War right on through the Revolutionary War. Their is no telling how many hidden treasures lie waiting for the resourceful treasure hunters out there, but this might be worth going after! Let me know if anybody has heard about this treasure or if you've got any intel to share on the area .. Oh and by the way from the sounds of this one, you've got about a 90% chance of hitting pay dirt at this site - REMEMBER to get permission BEFORE metal Detecting!! These are good people in this town and almost every farmer in Upstate NY has never given either myself or Treasure Dave a problem when in comes to metal detecting on their land, so just make sure to ask. Anyway here are the links below.
Get out your reader's cause here is the first link - Just Click Here. 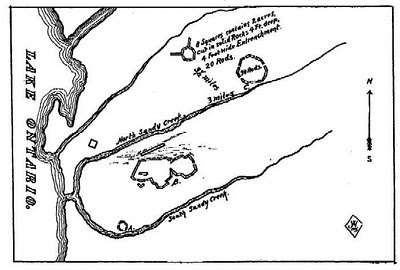 You may have also noticed the old maps are not to scale, so take that into consideration before you start your hunt; but this is a link to historical background on the site - Click Here .. I'm practically giving treasure away .. so remember where you got your tip !
Posted by Dan Piraino No comments: