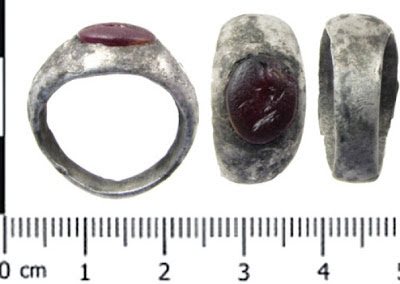 She was the Roman goddess of fortune and good luck, and now she’s set to smile on a Leeds treasure-hunter. This gem-set silver ring – thought to feature the goddess Fortuna – was found by metal detecting enthusiast Andrew Diamond in a farmer’s field in Micklefield.


Now the 2,000-year-old trinket has been declared official treasure, and is set to grace the collections at Leeds Museum. And once it has been valued by a committee of the British Museum, its finder and the landowner of the site where it was found will split a reward worth the market value.


A Leeds treasure trove inquest heard the ring dates from the Roman era, and was made between the first and third centuries AD.


The inquest heard Mr Diamond – a metal detector for 20 years – had stumbled on the find while detecting in a field in Micklefield in August 2010. He told the inquest in a statement that he had been out on the recently harvested field, with the permission of the landowner, when he came across a “conductive” object.


He dug several inches into the ground and found a silver ring. The find was examined by archaeology experts from the British Museum, who confirmed Mr Diamond had unearthed a Roman gem-set ring.


Mr Hinchliff said he was satisfied the find “does constitute treasure” and it will now be handed over to the appropriate authorities. Amy Downes, from the West Yorkshire Archaeology Advisory Service, said the ring would now be a valued by a special committee of the British Museum, and the market value paid to the finder and the landowner as a “reward”.

Under UK treasure laws, gold or silver objects which are at least 300 years old when found can be classed as “treasure” and officially belong to the Crown.
Posted by Dan Piraino No comments: