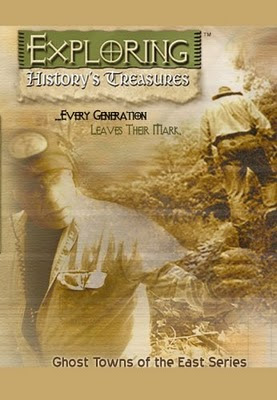 My good friend and fellow Treasure Hunter Frank Pandozzi' has an awesome treasure hunting TV show that I know might be just the cure for that "cabin fever" we are all experiencing right now.  Check it out! Let me know what you think, Just Click Here!
Posted by Dan Piraino No comments:

Going Deep For Treasure With The Coin Diver

Here is a cool video from a fellow water hunter .. Hope you enjoy!
P.S. Wishing everyone a very Merry Christmas and Happy New Year!

In 1987, on the site of Fort Hunter, archaeologists started work before construction began for a parking lot for the Schoharie Crossing State Historic Site. The work resulted in the first recorded material evidence of the 18th century settlement. The full report is fascinating. 199 fragments of bone, teeth and shell reveal the dietary habits of the residents included pork, beef, shell fish, fowl, and possibly venison and mutton. 125 remnants of vessels and utensils were found. The only evidence of alcohol consumption were found in four dark sherds of bottle glass. Of the 114 ceramic sherds with a good percentage being tin-glazed earthenware (delft). Sherds of buff earthenware, white salt glazed stoneware were found but no creamware. Fourteen vessels specifically identified were teawares! Obviously teatime was a ritual at Fort Hunter. Other objects found include a single straight pin, two sections of a shoe buckle, a bone brush, sherds from a medicine vial and two William III and one George II half pennies. An iron Jew's harp was found, which was a common trade item, and 199 white clay fragments of smoking pipes. At least 15 were probably produced by Robert Tippet of Bristol (whose pipes were also found at Fort William Henry and Fort Michilimackinac excavations.) Architectural artifacts included nails. carpenter dividers and window sherds. Deeply buried walls were discovered, but not explored - they may be part of the original fort. All the evidence provides a glimpse into the colonial life at Fort Hunter. 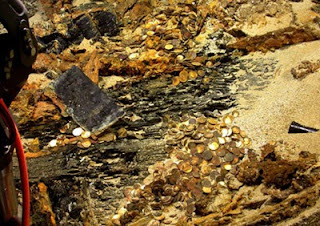 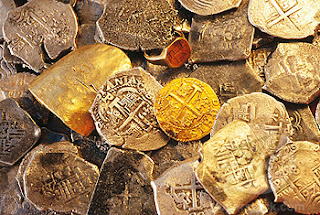 TAMPA — Sunken treasure, WikiLeaks documents and a priceless French painting.
Suddenly, a great deal of international drama has touched down in Tampa and reads like a diplomatic thriller — with half a billion dollars in gold at stake.
For years, Tampa's Odyssey Marine treasure hunting company has been fighting with the Spanish government over a 17 tons of gold and silver coins that Odyssey discovered and brought up off the Atlantic Ocean floor. Click Here To Read More.
Posted by Dan Piraino No comments: