Rebel Treasure And The K.G.C. 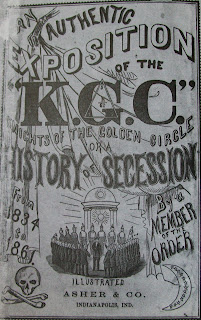 Knights of the Golden Circle
The Knights of the Golden Circle was an American secret society organized in the South in 1855 to promote slavery and to extend it, particularly into northern Mexico. Later, during the American Civil War, the society spread to Ohio, Illinois, and Indiana and also functioned in the border states of Kentucky and Missouri. During the war, the Northern members pressed for peace and for reducing the increasing powers of the federal government. Public charges were made that the Northern groups were engaged in treasonable activities such as spying and planning armed insurrections against the Union. In 1863 the organization was renamed the Order of the American Knights, and early in 1864 the group was reorganized as the Sons of Liberty under the leadership of the American politician Clement Laird Vallandigham. In 1864 the membership reached a maximum, estimated to be between 200,000 and 300,000. Some of the members interfered with the Union war effort chiefly by hindering enlistments in the Union army and encouraging desertions from it. It was during this time period that the Knights of the Golden Circle began to bury large amounts of gold and silver. They also began to stockpile weapons in secret locations.

Many of the smaller caches have been moved to larger, combined caches, and as a result, many of the legends will end up leading to an empty hole. For this reason, it is best to acquire information on as many as possible, research them in advance, and pick the most likely ones out before going out into the field. Whenever a K.G.C. cache was emptied or moved by the K.G.C., additional symbols were placed on the stone markers to alert fellow members that the cache was no longer there. By examining photos of known markers, it is possible to determine which caches are worth going after, and which are long gone.

K.G.C. researchers talk about needing a series of two or three transparent overlays in order to make any sense out of the K.G.C. maps. This is not true. When K.G.C. operatives buried some of the larger caches, they marked them with several stones having symbols cut into them as directions. The markings were accurately inscribed with the help of these so-called "overlays." In reality, the "overlays" were tracings, taken from each stone and transferred to the next stone, made onto the semi-transparent oil cloth material of their "slickers" (raincoats). To relocate the cache, all overlays would be placed and aligned (according to specific instructions) over the "key" stone to produce a very specific map. Losing the overlays made no difference, since they were made from the markings on the stone in the first place, they could be easily reconstructed in a matter of minutes once the original stone was found.

"It is said that no records exist of the K.G.C. after 1916." The locations of all the smaller caches (and larger ones too) were recorded on maps. Each map was rolled up and put into a cylinder made from rabbit fur treated with cosmoline. This tube was then tarred, and finally waxed with bees' wax.

"The maps from all the caches in a particular surrounding area were then sealed in a safe or chest and buried near a large or well-known river." Sixteen such safes exist throughout the country, each containing the maps for a specific area. Each safe (chest) was buried on a pillar of criss-crossed railroad ties to prevent it from sinking into the ground.

It is a well-established fact that over twenty million dollars in jewels, rare artifacts and precious metals have been recovered from cleverly concealed Spanish treasure vaults by latter-day treasure hunters. What is more astonishing is that it is estimated that there are billions still awaiting discovery in places where it requires only the patience and time to be recovered. Reading and studying is only the first step to being able to make a big discovery.

Far too many treasure hunters spend thousands of dollars in fruitless efforts simply because they fail to first nail down their quarry, and because they never learn the proper methods for interpreting and understanding the Spanish and K.G.C. symbology. Research and knowledge of the signs and symbols remain the only keys to success for the serious treasure hunter. Some say it's senseless to even consider a search for a lost mine or K.G.C. location unless its existence can be verified by either, (1) church or courthouse records, personal diaries or waybills, or documents stored in various archives, or (2) the actual discovery and correct interpretation of ancient Spanish and K.G.C. symbology in places where Spanish mining operations or a K.G.C. location are known to have existed. When either of these conditions prevail it becomes very important that the correct interpretation of the documents or symbols be arrived at. Since incorrect interpretations will provide nothing but mind-boggling frustration, extensive loss of time, and eventual failure for the weary treasure hunter.

The three steps are- learn the meanings of the Spanish and K.G.C. signs and symbols and the correct way to apply those meanings when interpreting them.  Research any records or other evidence that will help establish the existence of the treasure. Patience's is the secret of success. Untold wealth could be within inches of your grasp...
Posted by Dan Piraino No comments: 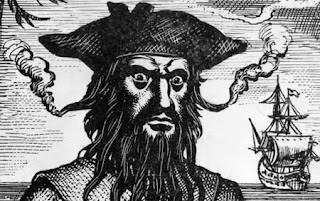 RALEIGH - A case exhibit of small artifacts from the wreck of what is believed to be Queen Anne’s Revenge (QAR), Blackbeard’s flagship, will be on display at the N.C. Museum of History in Raleigh from Jan. 7 through 30.
The QAR(www.qaronline.org) ran aground in Beaufort Inlet in 1718, and the N.C. Department of Cultural Resources (www.ncculture.com) has led research at the site since 1997.
The exhibit originated at the N.C. Maritime Museum in Beaufort, the official repository for the shipwreck artifacts, within the Division of State History Museums.
A brass buckle that may have fastened a belt or a bandolier full of weapons will be exhibited.
Brass scale weights for weighing reale silver coins will be on view.
The reale weights were necessary because the smooth-edged coins could be filed or chiseled down (giving rise to the term “chiseler”), thus the coins devalued.
A brass quillon block with gold gilding and blade fragment from a small hunting sword will also be exhibited.
The ornate scrollwork and fancy handle design were unusual for pirate gear, so the sword may have been acquired on some adventure.
It was recovered in 2007 and has been conserved and readied for display.
See more at http://www.youtube.com/watch?v=sHCSUf1zH0Q.
This wreck was located in November 1996 by Intersal, Inc., with information provided to Operations Director Mike Daniel by company president Phil Masters.
Archaeologists with the N.C. Office of State Archaeology in the N.C. Department of Cultural Resources lead the research on this shipwreck.
For more details about the exhibit, call (919) 807-7349. For information about the Museum of History, located at 5 E. Edenton St., call (919) 807-7900 or go to www.ncmuseumofhistory.org.
The Queen Anne’s Revenge Shipwreck Project, the N.C. Maritime Museum and the N.C. Museum of History are within the N.C. Department of Cultural Resources, the state agency dedicated to the promotion and protection of North Carolina’s arts, history and culture, and podcasting 24/7 with information about the Department of Cultural Resources at www.ncculture.com.
Check Out More At Queen Anne's Revenge
Posted by Dan Piraino No comments:

The Battle Of Monongahela And General Braddock's Buried Gold 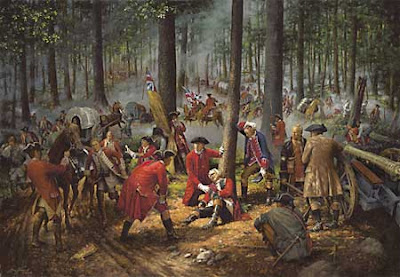 In late spring of 1755, General Edward Braddock moved his army of over two thousand men north from Virginia towards Fort Duquesne.

By July 9th the troops arrived at the Monongahela crossing, six weeks behind schedule .
Expecting an ambush to occur during the river crossing, Braddock took precautions to see that all was secure before sending the troops through the shallows.

With the last man safe on the other side, Braddock and his men moved forward into the forest canopy with a renewed sense of confidence.

Within the next few hours, their confidence would be replaced by panic and terror.
General Braddock himself had four horses shot out from under him, he fell with the fifth, mortally wounded. The battle was lost.

Tattered remnants of Braddock’s army fled back across the river.
Braddock, badly bleeding, was loaded with two other wounded officers and taken from the battle ground, He died within days of the battle...


“We marched to that place, without any considerable loss, having only now and then a straggler picked up by the French and scouting Indians. When we came there, we were attacked by a party of French and Indians, whose number, I am persuaded, did not exceed three hundred men; while ours consisted of about one thousand three hundred well-armed troops, chiefly regular soldiers, who were struck with such a panic that they behaved with more cowardice than it is possible to conceive. The officers behaved gallantly, in order to encourage their men, for which they suffered greatly, there being near sixty killed and wounded; a large proportion of the number we had.” ~ George “Hero of the Monongahela” Washington 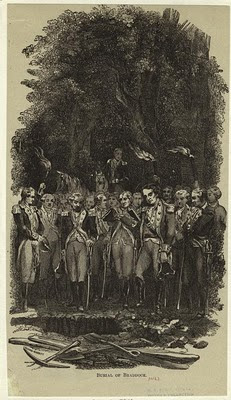 So here is the treasure story ...
June arrived as General Braddock's army sat in Alexandria, Virginia collecting troops for his journey westward into the wilderness.
Through the Shenandoah Valley lies the then fur trading town of Winchester.
With 2,500 men, 4 howitzers, 4 12-pounders and 4 6-pounders, Braddock began building a road to reach Fort Duquesne starting from Alexandria toward Winchester, this became an agonizingly slow undertaking through the heat and mud. In less then two weeks, traveling about 2 miles a day, Braddock’s army had only reached “Newgate” (renamed Centreville in 1798). His hopes of going North or any further where deluded as the wagons and cannons became bogged down in the moist Virginia clay.

Desperate, Braddock gave orders that included a split of his troops into a “flying column” and gave additional orders to bury the artillery, reportedly two of the brass 6-pounders (weighing 1,500 pounds each) pointing skyward in the ground.
He dismissed all but a few trusted officers and these cannons soon became treasure vaults.

According to papers that had found their way back to England, later discovered by an archivist, Braddock and his officers poured $30K in gold coins that was to be used to pay troops and war efforts.
The cannons where plugged and sealed.

General Braddock’s demise: Marching on to Western Pennsylvania with his remaining 1,300 men to what is know as the Battle of the Monongahela on July 9, 1755, both armies came upon each other about 10 miles south of the fort.
The engagement lasted from 1-3 hours. As the sun fell, the surviving army of American and British forces was able to fallback but lost many infantry and officers – as well as the only living witnesses to the cannons filled with gold coin's!
Posted by Dan Piraino 4 comments:

Divers May Have Found The USS Revenge 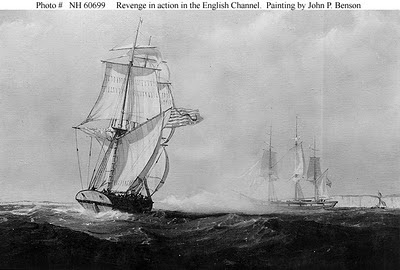 The Treasure Train Of Lake Champlain 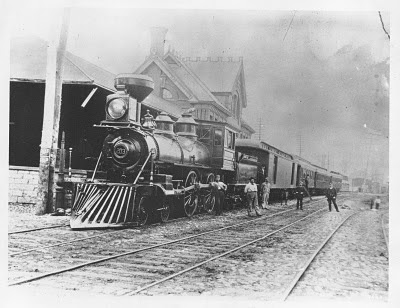 This sounded very interesting, I thought you might enjoy it- Click here to read more...
Posted by Dan Piraino No comments:

Now this is how its done! One of the best underwater metal detecting videos I've ever seen on youtube.